Wild North is a 5 reel, 40 payline video slot game developed by software provider, Play ‘n Go and launched in 2015. The game is set far north in a snowy land full of wild animals, where people are unlikely to be found. This is a visually attractive game with impressive graphics and an engaging soundtrack. 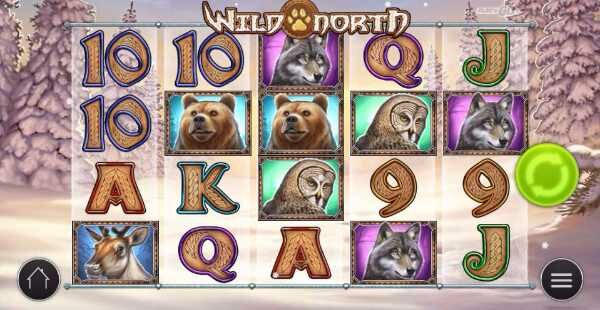 Wild North is a non-progressive video online slots game with 5 reels, 4 rows and 40 paylines.There are seven unique bonus features that are randomly selected from a bonus wheel and that create many extra ways to win through fun and entertaining games. These features include mega symbols, wild reels, stacked symbols, up to 30x multipliers, 2×2 symbols and the Wild North Explorer bonus feature which offers cash prizes and entry into different bonus features. You will find yourself spinning through a landscape of wild nature like you have never seen before as you aim for winning combinations and to trigger the bonus features.

The game has a coin range of $0.20 to $100.00 with 20 coins available per spin, making this game ideal for high rollers, but also suitable for players with smaller bankrolls. The symbols in the game include:

Wild North is a beautifully designed slots game that takes players into the depths of nature: It is set in a land so far north that it is virtually uninhabitable by people and the game shows nature at its best with the undisturbed landscape and the animals that can be found there. The background of the game shows a bright blue sky with a snow covered land and clusters of pine trees covered in snow standing on either side of the reels.The faint yellow and pink glow of a sunrise can be seen behind the reels between the trees. The

The low-value symbols (the playing card symbols) do not have a background, making them transparent so that the beautiful background scene is visible while the reels spin. The high-value symbols have different coloured backgrounds and are bordered by intricate designs. The high paying symbols include wild animals that can be found in the snowy land. The soundtrack adds to the wintery feel of the game.

Wild North is a non-progressive video slots game with a fixed jackpot. Players can win up to an impressive 1,250 coins available during the Wild North Explorer feature. This is a high variance game that offers the opportunity of high winning payouts.

Wild North is not only attractive for its graphics, but also for the wide range of special features that are available. With 7 bonus feature games available via the Northern Lights bonus wheel, it offers many unique ways to boost your winnings and as the features are randomly awarded, you never know which feature you will be awarded each time you trigger the bonus round.