With whopping 4,096 ways to win and the chance for the guitar-strumming leprechaun to randomly sync up the reels, the Yggdrasil slots creation Rainbow Ryan puts you in the front row to win all the dough. Released in July 2017, this game is already a classic. 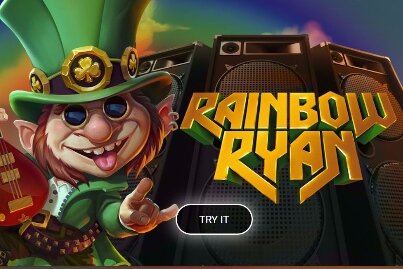 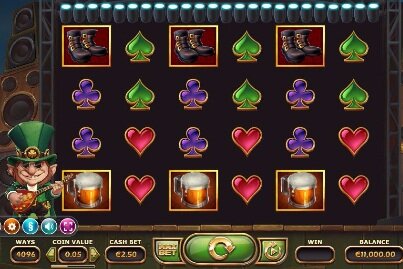 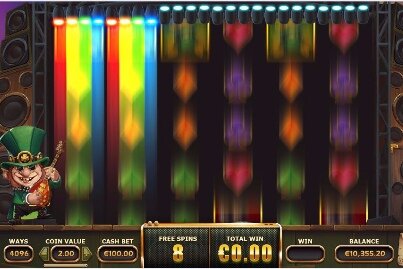 Playing Rainbow Ryan couldn’t be simpler, with everything that you need to be laid out on the game page. Playing on a slot machine of six reels and four rows, you can make your bet selection at the bottom of the slot section.

Also along the bottom are your play buttons. You can quickly change your coin value and cash bet to the maximums by pressing the max bet button before you spin. Next, to that, there is the circling arrow button which indicates the spin button for one play. Then there’s the circling arrow around a play symbol, which is the autoplay button. After pressing the autoplay function, you can select between ten and infinite free spins to be played through automatically.

At the bottom right of the screen, any win that you claim on the reels will be shown in the win box, and your remaining balance is ever-visible there as well.

Once you’ve selected your coin value and cash bet size: You can press the spin button to play through one round of the game. You’ll be wanting the leprechaun, Rainbow Ryan, to sync up the reels, or for the golden wild tokens to appear for the big wins. Landing three or more of the old-school radios labelled Free Spin will also help to stack the cash.

In regular play, the high-value symbols to look out are the beers, the microphone, the leprechaun boots, and the leprechaun hat stuffed with gold coins – which return from 15x your bet for two beers up to 250x your bet for six leprechaun hats stuffed with gold coins. Once you’ve done a spin, your wins will be highlighted on the board as well as the multiplier on your cash bet that’s causing the money to slide into your balance.

There is a maximum win of $510,000 which can be attained by synching wild symbols in the Rainbow Reels when either randomly triggered by Rainbow Ryan or within the Free Spins Mode.

Set on a concert stage with heavy bass speakers stacked to the rafters on either side, the best visuals of the game come from the ever-present Rainbow Ryan character, who stands at the front of the stage playing his guitar. Whenever you land a win, he breaks out of his usual beat to bust out his own little riff, and he really gets going when randomly popping out the Rainbow Reels.

The reels spin in seamlessly, with winning symbols pulsing on the screen to show you your win – as well as your win multiplier tallying up on the screen. The Rainbow Reels kick in the real excitement, flowing down the screen with pace before the big reveal of hopefully win-securing symbols.

Rainbow Ryan is backed by some upbeat rock music, with the leprechaun strumming in a new tune when your wins come in. A special guitar solo gets slammed out by Rainbow Ryan when a big win is sealed, or the Rainbow Reels come into play. The music certainly keeps the tempo and excitement levels of the game very high.

There isn’t a main jackpot or progressive jackpot to be won on Rainbow Ryan, but by combining wilds within the Rainbow Reels – likely in the special feature of the free games – you can win a mighty $510,000. The game is moderate in volatility, and to win the most money, you’ll need to play with the maximum cash bet of $100.

The Rainbow Reels riffed in by Rainbow Ryan are the main draw of this game with the special features being centred around their winning potential. Rainbow Reels will spin in the exact same symbol combinations as each other. So, in the regular game you may randomly trigger one or two for a spin, but in the free game, the Rainbow Reels really make a difference.

With the Rainbow Reels spinning in huge winning combinations, we know that the originality of Rainbow Ryan will have you hooked. So go on, get yourself down to the front row and let the leprechaun win you some money.