The Wild West was a no-nonsense kind of place, and in that spirit, Magnificent 777sbrings you a no-nonsense slot game sure to warm a slot purist’s heart and possibly fatten his or her wallet. 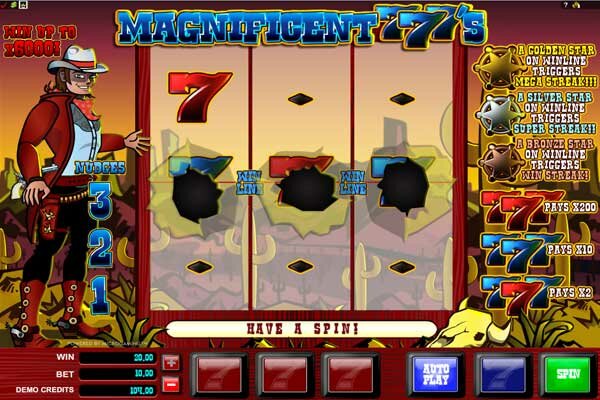 This 3-reel, 1-payline machine is nearly as old school as it gets, but with a few very small twists that even traditionalists will love — exactly the feel Microgaming was trying to capture when it designed the game and created the software to support it.

Featuring a cowboy theme and a number of quality multipliers and winning combinations, Magnificent 777s is sure to keep gamblers entertained.

The 3-reel slot lets players wager between $0.10 and $10 on its single payline, and with a max payout of 6,000 coins, players can reel in up to $60,000 on a single spin. The game’s symbols include three variations of 7s and three different sheriff’s badges — bronze, silver, and gold.

The 7s can be used to build winning combinations on the payline, as follows:

The stars, though, are the most important pieces, as they unlock the Win Spin Bonus Game, each with varying multipliers. The bronze game has the slimmest winnings, offering multipliers between 6x to 450x the payline bet. The silver star offers players the chance to win 22x to 550x their payline bet, while the gold star can lead to paydays between 52x and 6,000x the payline bet.

The game also allows players to nudge and hold. Players can set these features to be done automatically in an optimal way, or can choose to manage the nudges and holds themselves.

Sticking with the Wild West theme, Magnificent 777s is set over a digital screenshot of the desert at sunset. A suited up cowboy sits stage left of the reels, watching over your spins with a warm western smile. To the right, the various symbols and their payouts are depicted. Below the reels, a scrolling bar of text encourages and challenges players with thoughts like “Is it your lucky day?”

The jackpot on Magnificent 777s isn’t on par with some of the big paydays you’ll get on a more advanced progressive slot, but it’s nothing to sneeze at for a 3-reel machine. If players bet the maximum and enter the Mega Streak Bonus Spin round — earned by landing the Gold star on the second reel — they can earn $60,000 in winnings of a $10 bet.

The three sheriff’s stars and accompanying bonus game are the big draw here. In order to unlock the bonus game, all players need to do is land one of the three stars (bronze, silver or gold) on the second reel. As was mentioned above, the three stars lead to games with varying multipliers, and players are awarded a random number of free spins and assorted multipliers that can let them earn prizes within the range associated with their star.

Beyond the bonus games, players will also be able to take advantage of the nudge and hold features to help create more winning combinations. The nudge feature is activated randomly, and when active, allows players to force one of the reels to spin an extra notch, potentially letting you drop a needed 7 into the payline to earn a big win.

The hold feature is also generated randomly. Holding allows a gambler to freeze one of two reels after a given spin, possibly creating more winning combinations on the next turn. For instance, if a player lands a red 7 on a holdable payline, it’d be advantageous to hold that reel and spin the other two, as it could lead to a triple-red 7 payday (200x) or at least a row of different colored 7s (2x).

To read more about different games check out our slot games page.