It’s a hard thing for a slot to look unique. With hundreds of variations of slot machines available online, a game has to do something truly special to set itself above the rest. The Hitman casino slot game has figured out a way to do that. 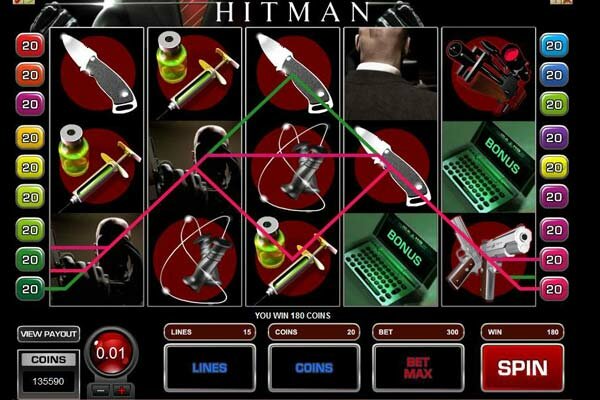 Boasting a pair of bonus games, including one of the most entertaining in the industry, Microgaming’s Hitman has successfully made the jump from the video game and Hollywood blockbuster into top slot offering. In particular, players will love the Contract Bonus Game.

Hitman is a 5-reel, 15-payline video slot that has plenty to offer beyond its action-packed theme. Players can wager up to 20 coins per line, meaning the max bet is 75 coins. The game is loaded with multipliers and special symbols and features a unique set of symbols. Rather than using the standard 10, J, Q, K and A, Hitman comprises of various weapons that can be connected on paylines to form winning combinations.

Additionally, the game features a number of special symbols players will want to look out for:

Hitman’s sounds are designed to create a mysterious tone as if the player is lurking unnoticed in shadows with the Hitman. Smaller winning combinations are usually signified with muted clicks, while bigger wins will spark graphics featuring video, music and other sounds from the Hitman video game. Visually, the game takes place on a black background that befits the subject, with slick symbols and quality graphics mixed with the gameplay.

There are three big paydays that gamblers should look for from the Hitman video slot. The first is a 4,000x payout that occurs when players land five of the Sniping Hitman symbols on the same payline. The second is 6,000x cashout players can pocket by picking the right symbol in the Insignia Bonus Game. Lastly, there is a 270,000-coin payout player can win the Contract Bonus Game. Those enticing jackpots help offset the game’s fairly substandard 95.48 payout percentage.

The bonus games are the big draw here, with the Insignia Bonus game and Contract Bonus Game offering huge paydays and a fun change of pace from regular slot spinning.

After picking a target, players have to select a weapon to execute the hit. Players have their choice of five weapons: a handgun, a sniper rifle, a syringe, a knife and a choking wire. The payout will be determined by the player’s weapon choice. Choose the right weapon, and your payday could be massive, with the max win a whopping 270,000 coins.

You can play Hitman slot at any Microgaming casino.