Get out your skates because it’s time for Break Away slots. Hockey fans will love this sports themed slot machine from Microgaming Quickfire making it a great choice for Canadian players. Spin the reels filled with flaming pucks and hockey masks. 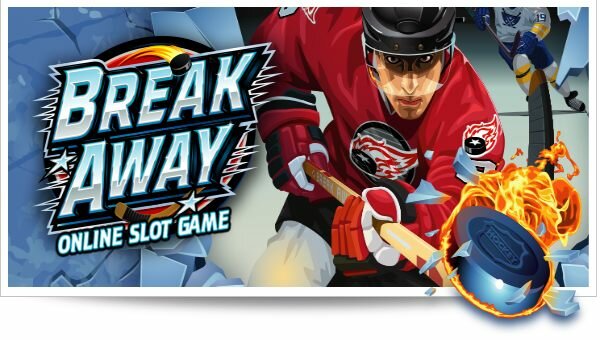 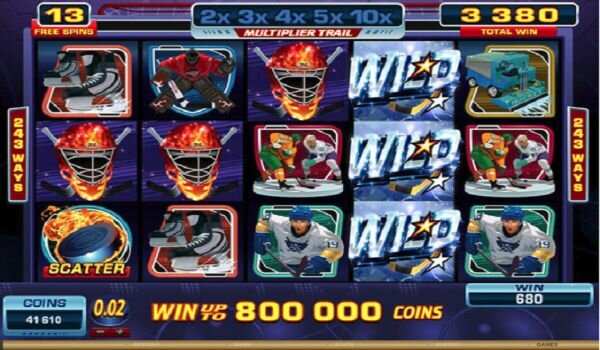 You can score fantastic prizes like free spins, multipliers, and special bonus features that could turn up to 40 symbols wild on the reels.

The Break Away Casino game has 5 reels with 243 ways to win: So you’ll have an even better chance of winning compared to other slot machines.  Hockey players slam into the reels triggering the smashing wild feature. This means you can have up to 40 wild symbols on the reels to boost your wins. That’s an unheard of the amount when it comes to slot machines and an especially appealing feature about the game.

Break Away has a number of additional bonus features: The hockey puck scatter symbol triggers up to 25 free spins. The game also has rolling reels which can award multiple consecutive wins and up to 10x multiplier during free spins.

How to Play Break Away Slots

Place your bet – To play Break Away slot game, first, you need to decide how much you want to wager. The minimum coin size for this game is 0.01 and the maximum coin size is 0.25.

Spin the reels – Then, just like with all slot machines, the game really begins when you push “Spin”. You’ll know the game started when the reels flash across the screen before landing in random order. You win the round if matching symbols land along a payline.

Winning – Payouts are according to the value of that particular symbol and how much you wager. The game has medium volatility which refers to how often you can expect to win during your playing session. That means you can expect relatively frequent wins while you play. The highest value payout for each symbol is as follows:

Break Away online slots has a particularly high number of bonus features like free spins, rolling reels, and stacked wilds. Each of these features adds excitement to the game and gives a chance for better rewards.

As soon as you open the game, the sounds of a hockey arena fill your speakers. You’ll hear crowds cheering, whistles blowing, and the beat of the puck as it hits the stick for a pass across the ice. Once you spin the reels, triumphant music plays when you land on a winning combination. Sports fans will love the hockey themed slot filled with flaming pucks, hockey players, ice arenas, helmets, skates, and even Zambonis. Keep an eye out for the smashing wild feature when hockey players randomly crash into the reels and turn an entire reel wild!

Break Away slots has plenty of bonus features giving you extra chances to win even higher payouts. Although the game doesn’t have a jackpot, you can still cash in a hefty payout by landing on 5 of the scatter symbols. 5 flaming puck scatters pay out 125,000 coins. You also have the chance to win a lot of free spins with this game. 3 or more of the flaming puck scatter award up to 25 free spins.

The rolling reels bonus offers an exciting feature in which the slot reels do not spin in the usual way. Instead, the reel symbols roll down onto the screen one by one. They drop down and fill the reels after you click on the spin button. Next, any winning combination disappears from the screen. Symbols above drop down and replace the empty places on the reels. If you receive another winning combination, the game pays you, and the cycle continues. You could win a huge amount of money on a single bet.

Meanwhile, the game also has a Break Away symbol that serves as a wild. This symbol substitutes for all other symbols except the scatter. It can also stack on reels 3, 4, and 5 giving you a much higher chance of winning. The symbol also has a smashing wild feature which means hockey players will randomly crash into reels 2, 3, or 4 turning a reel wild with a guaranteed win.

With rolling reels, free spin bonuses, and high multipliers, the Break Away casino game offers high payouts with plenty of action. Sports fans in Canada will love the hockey-themed slot machine with flaming pucks and hockey players smashing into the reels. Spin the reels and see if you will win the 125,000 coin payout or free spins bonus in Break Away slots.