Welcome, to Jurassic World™ – the incredible sequel to the award-winning Jurassic Park™ slot game. Created by Microgaming and released in June 2017, players get an enhanced gaming experience, enjoying elements from the latest epic dinosaur movie. 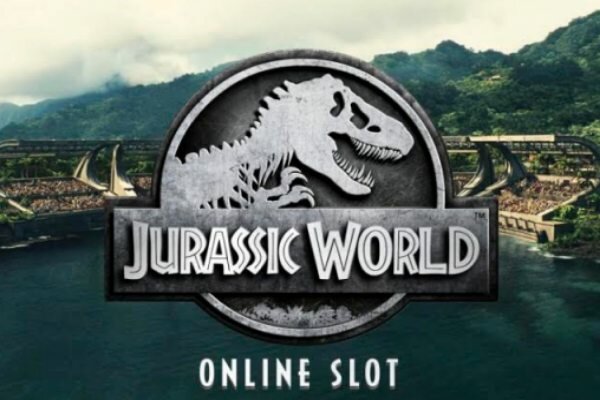 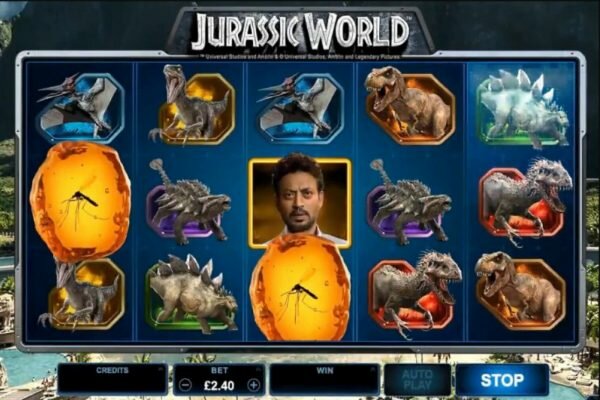 For all of the technological advances gone into bringing these dinosaurs to life, and indeed creating such a high-quality slot game, Jurassic World™ is very simple to operate. Upon opening the game, you’ll see the five different features available: indominus rex multiplier, Amber scatters, and three free spin features.

In the game, you’re met by the mighty pay line label of 243 ways, as well as the five-reel, three-row slot machine. The new Jurassic World park on Isla Nublar makes up the background, with the slot spinning before the mosasaurus tank.

Along the base of the game, you can see your balance, where to select your bet amount per game – from $0.30 to $36.00 – and the spin button; it’s literally that simple. From there, any bonus features that come in, such as those unlocked by the scatters, are played through for you. You just have to sit back, enjoy the icons from the movie, and watch the money spin in.

The biggest payout line in the game rewards up to 510,000 with the wild Jurassic World™ Logo or Amber scatter icons coming up big. With the opportunity for wins to be boosted up to 1000x by the Indominus Rex feature, there is a serious amount of cash to be won from this top-rated game.

With 243 pay lines, the other symbols can come up big for your balance too. Owen (played by Chris Pratt in the movie), Claire (Bryce Dallas Howard), Masrani (Irrfan Khan), and Hoskins (Vincent D’Onofrio) make up the human part of the winning, with five Owens pulling in $240.00. On the dinosaur side, the ankylosaurus, pteranodon, stegosaurus, velociraptor, tyrannosaurus rex, and indominus rex can return anything from $2.40 for three ankylos, or as much as $72.00 if five of the indominus rex tiles appear.

Jurassic World™ is set at the new park – prior to the breach – on Isla Nublar, where your spins on the slot machine are watched by an adoring crowd below, but they’re more likely keeping an eye on the massive tank behind the slot – where the mosasaurus lurks. Each tile depicts an item, character, or prehistoric creature synonymous with the film, with the stunning quality of each image bringing the game to life. The animation is slick and flawless, resulting in a smooth and exciting experience.

In each of the three exciting free spins bonus games, you get to adventure away from the tourist areas of the park, and into the out-of-bounds sections, where the real action occurs. Go into the Gyrosphere Valley free spins game to find yourself in a field among a herd or apatosaurus and triceratops. You can also find yourself among the velociraptors in the Raptor Den, or make your way to the cryogenics Creation Lab, where the dinosaurs are brought to life.

When you win big, you could witness a great slideshow of shots from the film or even a film clip to commemorate your win; but the real fun comes in when the screen starts to shake. On a win, if the screen starts to rumble and you hear the thuds of gigantic footsteps, you’ll know that the indominus rex is on its way. Strolling across your screen as though taken directly from the movie, the genetically engineered super-dinosaur can multiply your win by to 1000x!

With a triumphant soundtrack playing in the background, drums beating like a charging triceratops, you get the same epic atmosphere while playing this slot game as you would watch the film at the cinema. A gleeful tune peeps with a standard win so that you know when a big win comes in, with the music switching to an even more powerful score.

Despite the lack of progressive jackpot, Jurassic World™ still offers a huge payout of $510,000. With the free spin games bringing in more free spins, win multipliers, and frozen wilds, the possibility for significant wins is enormous. Of course, to win the biggest possible award, you’ll need to play the maximum bet, which is $36.00, but the exciting features can still roll in when playing at any other bet size.

Jurassic World™ could be classed as a medium-high slot machine regarding volatility, for what it lacks by way of a gigantic progressive jackpot that’s ever increasing, it makes up for with a vast number of pay lines, winning symbols, bonus games, and bonus features.

With the basic game being so simple, carried heavily – entertainment wise – by the iconic game tiles, the special features certainly pack a punch to bring the next-level fun. The randomly triggered indominus rex to reward up to 1000x the win is terribly exciting, and the free spin games are just as good.

When three or more Amber scatter icons are reeled in, one of the three free spin bonus features will unlock – with the player being given the choice of game after it has been unlocked 15 times. Gyrosphere Valley gives you ten free spins and puts you among giant herbivores of the Jurassic and Cretaceous period, increasing the multiplier on each non-winning spin, and only ending when a win is hit. In the Creation Lab, you get to do some gene – or rather tile – splicing of your own, with Cryo Wilds freezing for three wins, and winning tiles being removed to allow for new tiles. Then there’s the Raptor Den where all scatters are wild and are held until they award additional free spins.

Jurassic World™ is an incredible and worthy tribute to the epic film franchise, continuing the tradition of high-quality entertainment among prehistoric beasts. We highly recommend this game to all, even if you haven’t seen the film, as it’s very easy to play with so many chances to win on the spin.