One of the finest editions to NetEnt’s range of musician-themed slot games, Jimi Hendrix delivers on all levels. With incredible music, great artwork, and a huge range of special features, you will not want to miss out on this online casino game. 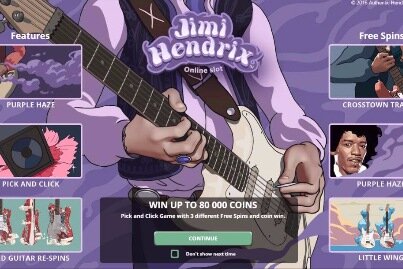 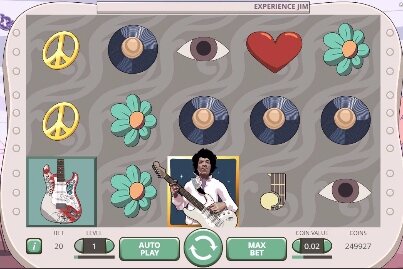 Entering the game: You see darkness but hear the solo of an electric guitarist. Then comes a burst of light and Jimi Hendrix himself is revealed. The first screen shows you the three feature games and three free spin games, before taking you to the five-reel, three-row, 20 payline slot machine.

Underneath the reels: There are a couple of betting options. On the left-hand side, you can change the level of the bet from Level 1 to Level 10, which change the bet value beside it. Level 10 makes it a 200 bet, and Level 1 makes it a 20 bet. On the right, there’s an option to change the coin value. From as low as 0.01 to as much as 1.00, the coin value also changes the size of your stake. Luckily, to show you how much you’re betting per spin, the thin black bar below the options tells you how much your bet is. For example, a bet at Level 10 and coin value 1.00 will be a total bet of $200.00 – which is the maximum bet.

In the middle: You will find the play options. The autoplay button allows you to select the number of spins that you wish to be automated – from 10 to 1000 – as well as set advanced settings, such as what size win or special feature should stop the autoplay. The circling arrows represent the spin button which, when pressed, performs a single spin with just one bet placed on the slot machine. The max bet button will immediately spin the reels at the maximum stake of $200 as soon as it’s pressed.

Once you’ve selected your bet amount: You can play the game. Press the spin button to roll in the reels and see your rewards. As is tradition, the low-end symbols are the numbers and letters; it’s the themed symbols that you’ll be looking to land in combination for big wins.

The real fun in the Jimi Hendrix game comes in the form of the features and free games: The Purple Haze and Red Guitar Respin features can be unlocked during regular play, and the Pick and Click feature will occur when three of the scatter symbols come in.

Finally, there’s also Coin Win. If three of the Jimi Hendrix gold coin symbols are collected, a coin win is rewarded with a random multiplier of between 8x and 30x.

Pastel art, groovy icons, guitars, and the great Jimi Hendrix make up the visuals in this aesthetically stunning game that has the colour purple flowing through it. Winning combinations burst with flowers as well as the symbols coming to life. It is a wonderfully crafted game with visuals worthy of a game dedicated to such a legend.

Backed by Jimi Hendrix hits Voodoo Child and Foxy Lady through regular play, you’re always in the mood for some more action. If 6 Was nine plays through the Crosstown Traffic feature, with Purple Haze the theme song to the Purple Haze Free Spins mode, as well as Little Wing playing when the Little Wing Free Spins reeling in. With chimes when you win and a trademark, incredible guitar riff when big wins tick up, this game provides a great experience to fans not just of Jimi Hendrix, but also rock music.

There isn’t a huge progressive jackpot on offer in the Jimi Hendrix slot game, nor is there a gigantic jackpot. Not including the influence of the Coin Win, the maximum win on a regular payline is 400, but with so many wild-inducing features and free games, the game’s big wins can come along regularly. This slot would be classed as a low volatility game, but Jimi Hendrix ensures that each spin is fun and full of big-win potential.

There is a massive range of special features in the Jimi Hendrix slot game, with three features, three free spin modes, and a multiplier. Starting with the multiplier, the Coin Win multiplies and rewards coins from between 8x and 30x of the initial bet when three gold Jimi Hendrix coins are collected.

The Purple Haze Feature: Can be activated during the main game when the symbol lands on the first reel, transforming the letter and number symbols into wilds for that spin. The Red Guitar Respin is triggered by four of the red Fender guitar symbols landing and activate a respin – with another respin if more red guitars land at the end of a respin.

The Pick and Click feature is one of the best: Activated when three of the scatter symbols appear on the third, fourth, and fifth reels. In this feature, there are four prizes up for grabs: the Coin Win – as previously discussed – Crosstown Traffic Free Spins, Little Wing Free Spins, and Purple Haze Free Spins. These are won by finding three of the same icon in the feature game.

Crosstown Traffic Free Spins initiate six free spins: During which wild reels appear at different places on the board on each spin. Purple Haze Free Spins consist of between six and 12 free spins which see the letter and number symbols transform into wilds. The Little Wing Free Spins are between 6 and 12 in number, with between three and five overlay wilds randomly appearing on the reels.

It’s a tremendous slot game with one of the best soundtracks of any online casino game. With the legend Jimi Hendrix as your guide, you can seal quite a few big wins in this game. We think that you’re going to love it!