Guns N’ Roses may have been in their prime during the late ’80s and ’90s, but their music and legend live on with them standing as one of the greatest rock bands of all time. This slot game by NetEnt epitomises that, combining their tracks with big wins. 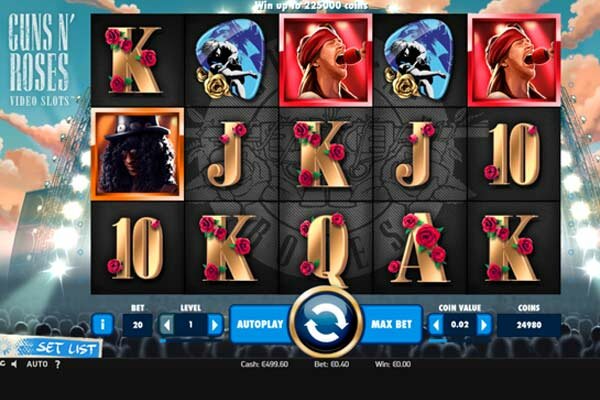 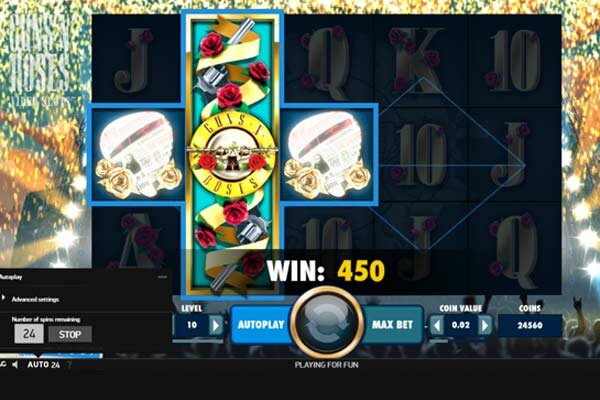 As one would expect from a NetEnt creation licensed to bear the name of Guns N’ Roses: the game is sublime; from the background of a mighty stage and a huge crowd, all the way to the individual animations of the symbols. Even the lower-earning symbols are in-theme, with the letters and numbers rocking some roses.

The soundtrack is one of the major draws of this game: With an optional playlist of Welcome To The Jungle, Sweet Child O’ Mine, Paradise City, November Rain, and Chinese Democracy there for you to enjoy. Without the soundtrack, you can hear a burst when you press spin as well as the click of a revolver’s loading gate when the reels roll in, and the crowd goes crazy when you land a big win.

There isn’t a huge progressive jackpot to be won on Guns N’ Roses with the maximum payout on one regular winning line being 750, but there are so many features, multipliers, and random triggers that make winning that much easier. It would be best described as a low volatility game, but wins come in regularly thanks to the unique features.

The Guns N’ Roses slot game boasts many special features – many of which are randomly triggered and wild. The Appetite For Destruction Wild is an overlay wild that substitutes for symbols and sits in the shape of a cross on the reels. The Legend Spins are randomly triggered to – over one spin, and two respins – change entire reels to wilds. The Solo Multiplier randomly occurs to multiply one symbol to between x4 to x10, resolving all wins along that payline with that multiplier. The wild symbol itself can expand to cover the entire reel as well.
There’s also the Bonus Wheel which is unlocked by landing three of the Platinum Record Bonus symbols: On the Bonus Wheel, you can win one of three features: win coins, Encore Free Spins, Crowd-Pleaser Bonus Game. The Crowd-Pleaser Bonus Game is a pick-and-click minigame which can earn you coins and free spins through three levels. The Encore Free Spins activate ten free spins during which a band member will cover reels as a stacked wild.
With all of the surprise thrills of being at a Guns N’ Roses concert: NetEnt slot games brings so many incredible special features alongside a killer soundtrack to offer an incredible online casino game. Get yourself down to the Guns N’ Roses gig today to see how much these legends can win you on the spin.