Bringing the emoji fans of the world a way to have a fun slot experience, EmotiCoins is both original and entertaining. Released by Microgaming in August 2017, you play alongside the sunglasses face winking face and many more of your favourite emojis. 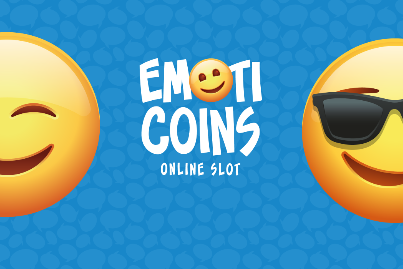 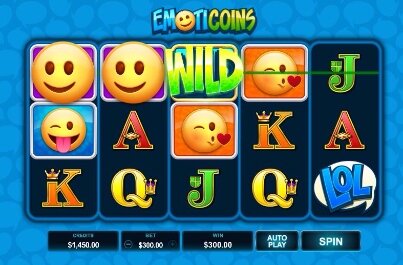 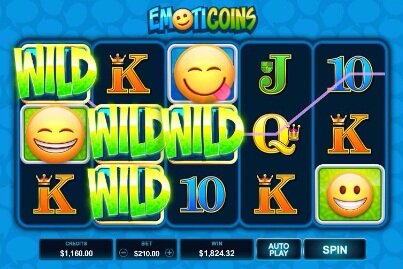 Once you’ve entered the game, you’ll be met by a screen showing off all of the great new features of the EmotiCoins game, which includes the Wild Blast and Wild Stickers features. These special features can be randomly triggered or brought about during the free games, but we’ll get into that a bit later on. Pass that screen, and you’ll come to the slot machine game board.

On five reels and three rows, EmotiCoins employs 30 pay lines on each spin. At the bottom of the page, you can see your balance amount, the bet selector, the win count, and the spin button. You can set your bet per spin at as low as $0.30 or as high as $300 using the plus and minus buttons at the bottom of the screen.

Once you’ve selected your bet, you simply press the spin button to watch your combinations fall in. In each game, you have the chance to roll in some of the classic slot machine letter tiles, as well as a wide range of emojis and wild symbols. As you would assume from the name, the emoji icons make up the basis of the game, presenting a range of winnings. Three wink faces will bring in $300 at the maximum stake, and five of the sunglasses faces will return $8,500. Symbols 10, J, Q, K, A return of $50.00 for three 10s at maximum stake all the way to $1,000 from five As.

The real fun comes in with the bonus tiles. Five of the EmotiCoins wild symbol will reel in $15,000, with five of the LOL scatter reeling in $30,000 at the maximum stake as well as ten free games. On any spin at the maximum stake, the biggest win is a whopping $92,000 when enough scatters, wilds, and the highest paying emojis – sunglasses, kissing – fall kindly on the page.

As you would expect from a Microgaming creation, this slots game looks fantastic. EmotiCoins appears as a modern, slick slot game, hosting many of the most popular emojis. When a winning combination of emojis comes in, the little faces come to life; for example, the kissing face blows a kiss, and the cool sunglass wearing smiley raises his eyebrows to you. The reels roll smoothly, with each win bringing in a fancy animation to mark the victory.

A trendy, upbeat soundtrack backs the EmotiCoins slot game, with the rustle of each spin ending with a light thud to show you your winnings. Any win will spark a joyful tune, with the accompanying animation bringing extra fun to each win. When you hit two of the LOL scatters within the first four reels, that’s when the game starts to heat up; the tempo is increasing drastically with a drumroll beat, the final columns lighting up, and an epic victory sound pumped out if that extra LOL lands.

As is the case in the vast majority of online slot games, the only way to bring in the maximum payout is the play with a maximum bet – which with EmotiCoins in $300 per spin. There isn’t a jackpot or progressive jackpot to win on EmotiCoins, but just one spin can bring in up to $92,000 through combining wilds and scatters, which is a very nice little earner.

You can still unlock the Wild Blast feature, Wild Stickers, and free games from the LOL scatters when playing less than the maximum stake, but naturally, the maximum win will have an equivalent cap to the bet size. This five-reel slot game could be best described as having low-to-medium volatility, with plenty of ways to win across the 30 pay lines of EmotiCoins.

There are two major special features to look out for on EmotiCoins; the first is the Wild Blast. The Wild Blast is randomly triggered, with up to five tiles becoming wild on any spin – guaranteeing a win. With regular EmotiCoin wild symbols rolling in regularly, it’s exciting to know that more can pop up at any random point of your play.

The second is the Wild Stickers, which become available in the Free Spins games triggered by landing three or more LOL scatters. On the free spins, wild icons become Wild Stickers, which means that one symbol on the first free spin will turn wild and stay in place, and then another shall turn wild on the third spin and will also stay in its place. For the duration of the free spins – the initial ten and then anymore triggered within the free spins – the wilds will stick in place on every alternate spin, leading to a multitude of winning opportunities.

Playing at as little as $0.30 per spin or as much as $300 per spin, anyone can get the Wild Blast or Wild Stickers within the free spins bonuses, so the game appeals to all walks of players – from the casual fun-seekers to the high rollers.

Whether you’re a bit emoji-mad and throw the fun little icons into every typed sentence, or just enjoy the casual smiley face from time to time, you will love this slick slot game. With plenty of ways to win, stunning graphics, and some very exciting special features to be unlocked, we very much enjoyed our time on EmotiCoins and think that you would too.