Bust The Bank by Microgaming (not to be confused with their 3-reel slot, Break da Bank) is a 5 reel ways-to-win game with a cops and robbers theme that includes a free spin round and other bonus features, plus a huge jackpot prize. 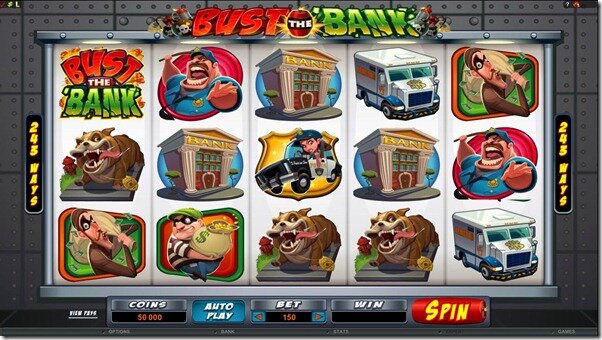 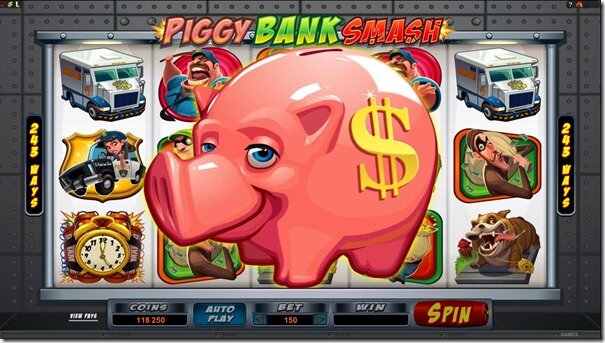 Robber bonus – During base play, the two robber characters Larry and Bob can randomly appear on the reels and award an online slots bonus amount, which will be a multiplier of between 1x -4x the total bet.

With its comic book style images, jaunty music and fast-paced action: Bust The Bank is designed as a light-hearted romp rather than a serious thriller. The two thieves at the heart of this online slot. Larry and Bob are archetypal villains, complete with masks and bags of cash, while the other symbols include cops, banks, bombs and armored cars. The music throughout is laid-back and light (reminiscent of a silent movie), although it becomes more upbeat and dramatic during the free spin bonus round. Overall, the game design is eye-catching and adds to the enjoyment of the online slot.

During base play, the biggest payout is 15,000 coins (up to $15,000) for hitting either 5x Larry symbols or 5x scatter symbols, when betting the maximum coin size and number.

Overall, Bust The Bank is a medium to high volatility Online slot, with an average RTP of 96.75%.