Microgaming’s Bikini Party slot leaves little to the imagination as it teases potential players with the prospect of five game ladies as the must-see symbols on this beach-volleyball themed casino slot. 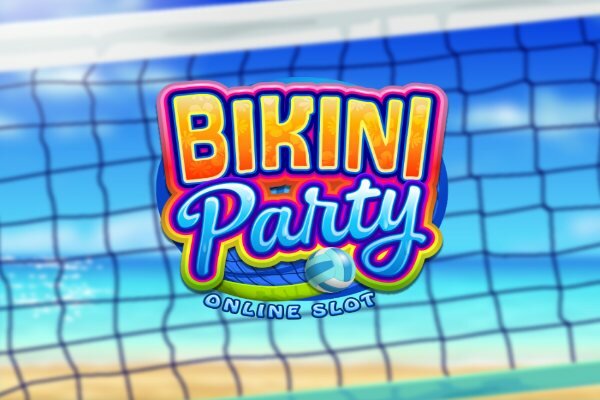 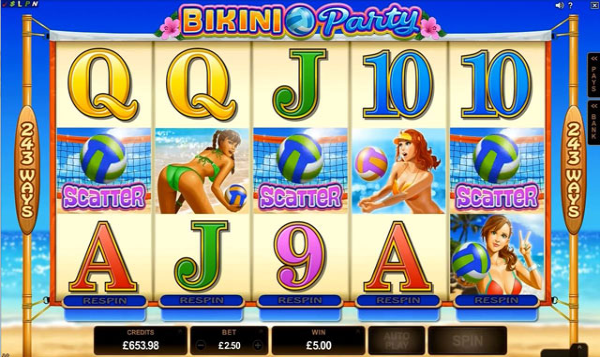 Whilst sporting a traditional set of five reels, Bikini Party slot dispenses with traditional paylines in favor of Microgaming’s 243 Ways to Win (of which later) and bolts on an unusual Respin feature to its base game to increase the chances to score a big win from its paytable.

For a bonus ride with Bikini Party slot’s beach babes, there’s a free spins feature to play for too, with up to thirty free, triple-paying spins up for grabs for those who like to party hard.

Mentioned above, Bikini Party slots come with staggering 243 Ways to Win in place of traditional paylines. For the uninitiated in such “Ways to Win”, how this works is that matching symbols simply have to appear on consecutive reels starting at reel 1 to be counted together, so simply seeing the same symbol on the first three reels gets you on to Bikini Party slot’s paytable.

The five bikini-clad ladies at this party are the five highest paying symbols in play here, but watch too for the following special symbols to boost your winnings:

Flexible betting options let you bet between CAD 0.25 and CAD250 per spin so you can happily tailor the cash you splash at this party to suit your budget.

To be honest, the general presentation of this Bikini Party casino game is quite ordinary with little imaginative flair in evidence when this slot is compared to some recent releases from the likes of, for example, NetEnt. The symbols are pretty static, even when they signal a win and the audio isn’t that thrilling either. There is a nice calming sound of the surf during spins, but the ‘win theme’ sounds pretty cheesy to our ears and doesn’t add to the ‘party’ vibe this slot’s theme should be aiming for.

The general presentation is probably fine if compared to typical Vegas slots, but Bikini Party’s title suggests a while lot more visual and sonic fun than it delivers.

For the biggest basegame pay on Bikini Party slot, you’ll be hoping to bounce five of the lady-in-red (bikini) onto the screen, for that can drop the headline prize on the paytable of 160x your stake. Better yet, getting into the free spins feature of this Bikini Party casino game triples all pays during that feature, so that means 480x your stake if that red bikini-d babe shows up for the free ride. For those with deep, deep pockets that could mean a return of CAD120,000 if you can handle dropping CAD250 on a spin.

Whilst the jackpot figures may seem lower than some rival online slots, Bikini Party is reasonably low volatility slot, so wins come relatively frequently and should please more casual players.

To get the party really started on this beach themed online slot, there are two special features to make a play for:

Free Spins Feature – With three or more Scatters in view on the base game, Party people get an award of fifteen free spins on the reels. All wins earned on these free spins are tripled, and the Scatters remain on the reels too so retriggers are possible to gain an extended ride on the reels. This is where the potential for really big wins on Bikini Party slot are likely to be realized, so keep your eyes peeled for those Scatters!

Respin Feature – This is probably the most distinctive feature of the Bikini Party slots, and is available after each spin of the basegame. At the foot of each reel is a “Respin” button, and if you hover over it a price to respin that reel will be revealed. Choose to play the gamble and that single reel is respun. In this way, it’s possible to snatch a win from a ‘no result’ or build a bigger win from an existing award, and you can keep respinning as long as the price is right. This is an excellent feature and one that puts a neat little spin (every pun intended) on the standard video slot features Bikini Party offers.